Early February 2015, the International Forum of Automobile Industry was held in Kazan, Republic of Tatarstan. Delegates from different regions of this country, members of the European Business Association, largest industrialists took part in it. A representative of TRANSLOGIX was present in Kazan, too. Topical subjects in the field of machine building under the new Russian conditions were dealt with in the event. In particular, there were discussed such matters as: government support measures for the Russian automobile industry, guidelines of strategic development of OAO ‘KAMAZ’, lines of increased competitive capacity of Russian suppliers, etc.

The Forum delegates were shown an auto service market review, told about tax and legal aspects of the secondary market. Within the framework of the International Automobile Forum, direct negotiations between automakers and wholesale buyers and auto spare parts and auto components manufacturers took place. On the final day, excursions to production facilities of Ford Sollers and Kamsky Industrial Park ‘Master’ were carried out.

According to the representative of TRANSLOGIX, the event was organized at a high level. It is planned to further participate in such useful programs. 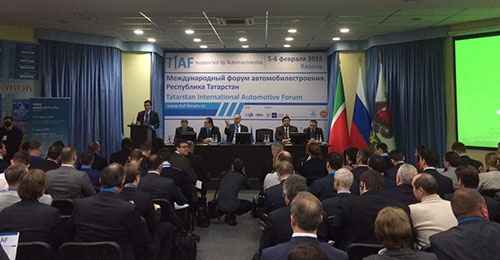