The VII International Forum “Saint-Petersburg – the sea capital of Russia” was opened in St. Petersburg on the 9th of October. Transport and Transit Potential”.

The forum was attended by the Head of the Committee on customs administration of Foreign Economic Activity of the St. Petersburg regional branch of all-Russian public organization “Business Russia”, the General Director of the company TRANSLOGIX – Arthur Filevich Yamalov.

The event consisted of several sessions which participants were representatives of business, government and various transportation committees.

The title of the report of Arthur Yamalov was: “Overcoming the conflict of interests of participants of the transport process as the main factor of competitiveness of Russian ports”.

General Director of TRANSLOGIX managed to tell about participants of the transport process in the port, number of participants of the transport process in groups, about interests of stevedoring companies and freight forwarders, their impact on competitiveness of ports, about line agents, companies, carriers and customs authorities. Also Arthur Yamalov showed a diagram of comparative characteristics of dynamics of changing volumes of transshipments of several stevedoring companies of the Baltic region, told about professional associations of the logistics sphere of St. Petersburg, presented the action plan on improving the transport situation in the seaports. 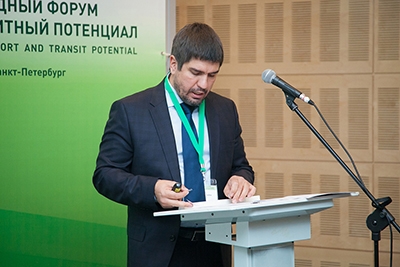